Black Limestone has become very popular in recent years, unfortunately however we find installers ruin its appearance with the use of unsuitable cleaning products. This was the case with this relatively new property in Highclere Village near Newbury in Berkshire.

Black Limestone had been installed throughout the exterior by a landscaping company, but the owner wasn’t satisfied with they had left the stone. It turns out they used brick acid to wash away the remaining residue that had been left from a messy installation. Limestone is acid sensitive, and this resulted in the stone being stripped of its natural oils that give it the rich black colour. The stone now looked very grey, bland and was extremely porous. It certainly wasn’t how the client expected the patio to look.

I visited the house and conducted a test in a small inconspicuous area. Luckily the Limestone hadn’t been sealed which was fortunate as stripping back exterior stone sealers can be a very time-consuming process. After the demo was completed the client was very satisfied and a provisional date was booked in. The client was eager to have the Black Limestone patio looking lovely ready for the summer weather, but we would need a dry day to be able to complete the work.

Highclere is a village situated in the North Wessex Downs, an area of natural outstanding beauty. It is also home to Highclere Castle, which has been used in many films and TV series, including Downton Abbey.

The first job was to remove all the surface dirt that had built up on the surface of the stone since it had been laid. I did this using a cleaning and extraction system that’s run from my vehicle. It’s a high-pressure cleaner with long hoses that can clean and extract dirt keeping things as mess free as possible. Once the area was cleaned the stone was left to bake and dry out in the hot sun.

Later that afternoon I conducted several moisture tests with a damp meter. The readings were good so I was happy the stone was dry, and I could move onto the next stage of re-oiling the stone. I used Tile Doctor Stone Oil for this purpose, it’s a conditioning product that penetrates the stone and revives the colour. Two coats were applied throughout and any excess oil that hadn’t penetrated the stone was buffed off. The oil was then left to cure overnight.

I returned the next day and was very pleased how the Limestone looked, the rich colour was now showing. The oil had cured, and the stone was ready to seal. Two coats of Tile Doctor Ultra-Seal were applied to seal the stone. Rated for external use Ultra-Seal works by occupying the pores in the stone thereby preventing dirt from become ingrained there. This product doesn’t change the appearance of the stone, resulting in a completely natural look.

My client was over the moon with how her Black Limestone now looked and left the following feedback: “Dennis oiled and sealed our newly laid black limestone paving. He transformed it from grey and stained looking into a beautiful black even colour. He takes great pride in his work and I would recommend him highly.”

Professional Restoration of a Black Limestone Patio in Berkshire

We suspect that the Old Quarry tiles laid in the conservatory of this Victorian house in Basildon, had been reclaimed from other areas of the property as the age of the tile didn’t match the time the conservatory was installed. Not only were the quarry tiles old but they had been covered in layers of red tile paint by previous home owners. This had now begun to crack and chip and look unpleasant, so the customer wanted the old paint removed and the tiles sealed for a more natural look.

I headed over to Basildon to take a look at the Quarry Tiled Floor; Basildon in Berkshire is not to be confused with the large town of Basildon in Essex, this Basildon is approximately 7 miles west of reading and is made up of the two small villages of Upper and Lower Basildon. Having taken a look at the tiles and run some tests I was confident that the floor could be restored successfully I gave them a quote for the work, which was accepted, and a date agreed for me to return and get the work done.

The first job was to tackle the layers of tile paint. Fortunately for me the paint had weakened over time and was fairly flaky in places which meant I could carefully peel away the dry paint with a blade attached to a scraper. This was a slow process but reduced the amount of mess that would have been produced if I was to use chemicals from the start.

Once I had removed all I could by hand the remaining paint that had fallen into the grooves and grout joints had to be removed using a strong dilution of Tile Doctor Remove and Go which is a coatings remover designed for use on tile, stone and grout. The process worked well but I had issues with the product drying out due to the sheer heat in the conservatory (must have been 30 degrees and above!). The Tile Doctor Remove and Go works best when it is left to dwell on the tiles for some time. To overcome this obstacle, I applied Tile Doctor Nanotech HBU Remover and covered it over with plastic sheeting to stop it drying out too quickly.

The HBU Remover which stands for Heavy Build Up, did the trick and after a couple of hours the tiles where ready to be cleaned using a black scrubbing pad fitted to a rotary machine and then rinsed off. The soiled water was then removed using a wet vacuum and after a further rinse was left to dry off overnight. Thankfully the high temperatures worked in our favour and helped dry the floor out and when I returned the next day it was ready to seal.

The customer had decided on a matt finish, so I applied three coats of Tile Doctor Colour Grow which is a impregnating sealer that leaves the desired finish and has the advantage of intensifying the natural colour of the quarry tiles.

Overall the customer was very happy with the outcome and left the following feedback:

“Very happy with the end product, the tiles came up very clean once the paint was removed. Dennis was very professional and kept the working area clean and tidy. He kept us informed throughout the work. Will certainly use again and recommend to friends”

Professional Restoration of a Painted Quarry Tiled Conservatory in Berkshire 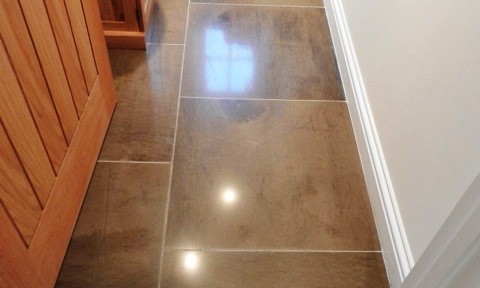 We were asked to sort out these beautiful “Moroccan Leather” Limestone floor tiles in the kitchen and WC of a house in Salisbury which had had been badly installed by the contractor. If you look closely at the photographs you can see grout residue (also known as Grout Haze) had been left on the surface of the tile ruining its appearance.

The most effective way to remove grout from the tile surface is with an acidic product such as Tile Doctor Grout Clean-up, you have to be careful not to leave it on the surface too long and wash the floor down with water afterwards as acids can eat through natural stone.

Once the grout haze was removed we set about giving the tiles a good clean using Tile Doctor Pro-Clean washing it down again with clean water before giving it a polish using a Green polishing pad to get a high shine finish.

There are a numbers of sealers you can use on Limestone each one can give a different effect, in this case we used two coats of Tile Doctor Colour Grow which really enhances the natural colours in the stone. 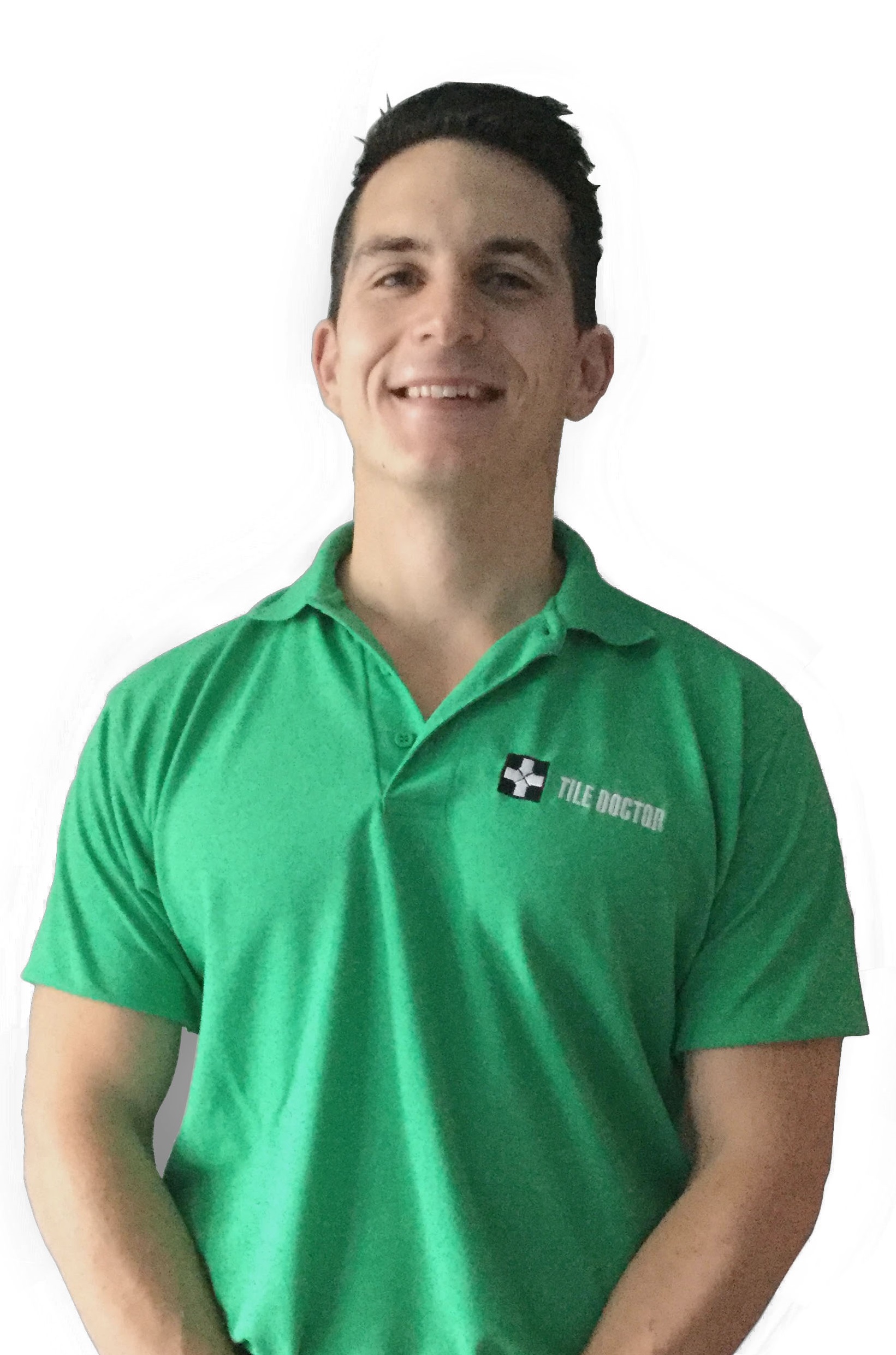